HI! MY NAME IS RYANN and this is my blog where I share designs, DIYs, home projects, recipes, photos, and my family's life story as it continues to evolve

Maybe this is too transparent, or will be post that I look back on in the future and feel I went one level too deep or too personal, but the truth is that I bit off more than I could chew last semester and I struggled quite a bit. Or rather, I bit off too much without the proper dentures to get the chewing done. Hence me taking this month to get my ducks in a row so that I am prepared and ready to incorporate classes again and still have time for myself, my relationships, and this blog – on top of the other responsibilities on my plate.

I kept feeling so overwhelmed that I never knew where to start and all I could think about doing was taking a nap. Under the coffee table. I hate feeling self-pitying – I try and never lose sight of the fact that there are many out there with a far worse situation than what I am in, but sometimes one just enters a spiral and you end up leaning on those you love in an unfair way to pull you back up for air.

Anyway, to try and combat having a constant defeated feeling, I started, and it may sound cheesy, but writing down three things I am grateful for and the list of things I accomplished that day. Too often I was going to bed thinking about all the things I had to do or how little I actually completed, instead of being positive and focusing on the successful things about the day. So now, the last thing I do before I hit the hay is pull out my journal and pour out some good ol’, glass-half-full, yay-I-did-it kinda stuff.

So far it has helped and for sure one of the things that I am going to be writing down today is how grateful I am that my current job allows me to have three day weekends every other week. Today is one of my days off and I have been having such a nice me-day. Part of this lovely me-day has included two of my very favorite snacks —

Apples with almond butter: Not much too this, I cut up my apple, squeeze a little lemon juice, and dip into some almond butter. The end.

I hope you, too get a good me-day soon. Warm hug-filled thoughts go out to all of you – thank you for reading and having this short story of mine be heard.

I am proud to announce that I have officially landed back on earth and will soon be getting back into the natural swing of things.

Turns out I had no routine, or plan of management for taking three classes last semester, on top of a full-time job and freelance work. So lessons learned, I will be working over the next month to develop a routine and way of maintaining a healthy body, both mentally and physically. My hope with this is that once classes start up again, I will already be so set in my routine that extreme chaos can be avoided.

One of the aspects of this plan is to be cooking more – and healthy foods. So tonight I made Kathleen’s (of Jeremy and Kathleen) Cauliflower Rice. It was delightful and one of those meals you actually feel great about eating. Up until today most meals have mostly been followed with self-loathing and guilty-tears.

I am also going to get up and go running in the morning. I know, right? I am a BAMF.

Working for the Weekend

Although the week has started and I am already well into my crazy schedule, my mind is stuck on my weekend. In my mind I am still bike riding along the strand or sipping mimosas with a good friend after finishing our 10K.

Only a few more days before we get to enjoy another little life break.

For some extra fun-timez, here are a few great things the internet has introduced to me today:

**Don’t forget to immortalize your favorite pet or loved one in a DIY cell-phone cover, either for the Hallmark holiday around the corner, or just because.**

Today I just got back from a very long, but exciting weekend up in San Francisco/Sacramento.  I am running on little-to-no sleep  and in my drunken-like-sleepy-state I am reflecting on how I have been treating my body lately.  Eating (almost exclusively) junk, drinking too much, working out too little (as in, not at all) and kinda neglecting any general up-keep needs, ie. haircut, severely cracked feet from the heat, etc.

So today I’ve decided to do a detox bath and hopefully kick start an effort in taking better care of mon self.

Here is a recipe that I have put together from my research/bathing experiences:

Now – I am no doctor – so please, make sure this is a safe choice for you before doing a detox bath.  Here are a few of my (non-doctor) notes about the process:

2.  Be very careful when getting out of the bath – a lot of people can get dizzy.

3.  Drink loads of cold water before, during, and after.

4.  I usually try to do a 40 minute bath, with a cold water rinse afterwords followed up with bundling myself up, which supposedly helps continue the detox even after the bath.

5.  Get a good book and or music to read/listen to and this might just become your new favorite thing.

6.  I try not to do this “detox” bath too often.  I again am no doctor and don’t know if high frequency detox baths are good or bad for you, but I try to limit them to no more than a couple a month and only when I am feeling particularly tox-full.

If you decide the detox bath, I hope you enjoy – I think I am definitely needing it today, and who knows, maybe I’ll finally start working out again one of these days.

First, let me apologize – I am going to make you feel worse about whatever you did last weekend..

I ran a mother trucking half marathon!!  Consider my own horn tooted. 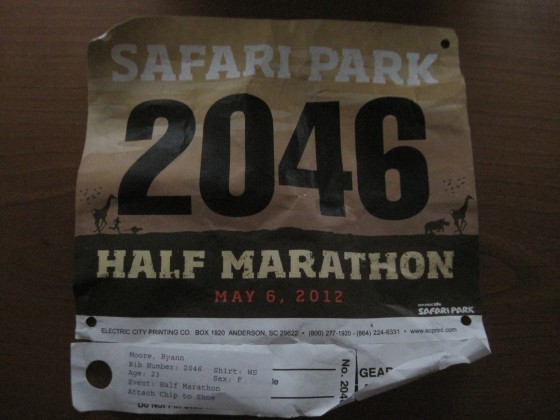 Don’t feel too bad though, because I quickly followed that up with some delicious San Diego microbrews and Temecula wines.  More or less, everything that was healthy about running a half marathon was quickly cancelled out with yummy alcohol.

We signed up in November last year, Alex and I.  Alex didn’t end up running, however, due to doing something even more heroic than running a half marathon – donating bone marrow to a 7 year old girl with leukemia.  I know I married a prince.

I ran, here and there, sometimes being really good about training, sometimes not, for several months to prepare for the Safari Park Half Marathon in San Diego.  And I now that it is over, I am happy to report it was quite a riot.  Throughout the course, we ran by a winery, two golf courses, an ostrich farm, cows, camels, elephants, cheetahs, and of course, some hungry lions. 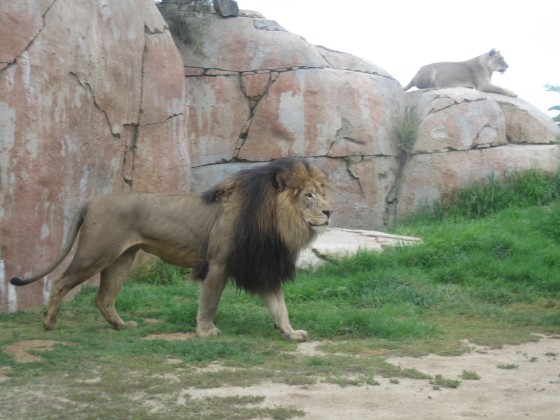 The biggest challenge for me was that about a week prior to the run, I definitely got sick and to this day (a week after completing the race) this nasty sickness remains.  I was scared.  I wasn’t sure I would be able to finish.  But in the end, I was able to beat my goal and my past time by a minute and a half.  Hooray!  I literally fist pumped over the finish line.

I wont say the run was easy, or even fun, apart from seeing some cool animals, but it was very satisfying.  I felt awesome, on top of the world.  And even though it was difficult and the training was time consuming, I would highly recommend doing it or something similar – 5K, 10K, a marathon – once in your life, if you can, because I think everyone deserves to feel super awesome about themselves or something they have done.

And if you take my suggestion, here is a quick thought to make the training easier:

The reason I say this is, the half marathon also had a costume contest and there was a man dressed as Tarzan, who LITERALLY ran the whole race barefoot.  I am not joking, scariest man alive.

Anyway, I understand that this post isn’t really design/DIY related and a bit braggy, but deal with it… love you!